Marvel Studio’s and Netflix are basically running the world, right? They keep knocking it out of the park with everything they produce, both together and separately, and their latest is no exception: “Daredevil.” The first of five street level Superhero series coming to Netflix from Marvel, “Daredevil” kicks off it off with the bang that’ll eventually lead us to the “Defenders” series. 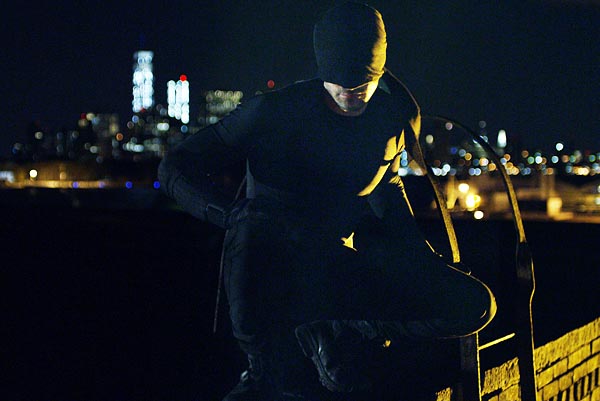 Charlie Cox as Matt Murdock, AKA the man in Black, AKA Daredevil

“Daredevil” tells the story of Matt Murdock (Charlie Cox), a blind lawyer who loses his sight in a chemical spill as a boy and as a result is given superhuman senses. All grown up, by day Matt owns a law firm with buddy Foggy Nelson (Elden Henson) and the two entrust their mysterious new client Karen Page (Deborah Ann Woll) as the firms secretary. By night Matt protects his neighborhood of Hell’s Kitchen using his heightened senses fighting crime and bringing justice where needed.

With the rise in crime in Hell’s Kitchen, Matt learns the man behind it is crime lord Wilson Fisk (Vincent D’Onofrio, terrifyingly good), who is not a fan of “the man in Black,” as Matt is known. Branded a masked vigilante Matt seeks refuge in “Night Nurse” Claire (the gorgeous Rosario Dawson) when his fight for justice goes array, eventually having to trust Claire as she is only one who know’s his identity.

This is not your standard run of the mill Superhero show— it’s easily the darkest thing Marvel has ever produced, and the payoff is excellent. Daredevil is a gritty street level hero, so there is no need to sugarcoat it: there’s blood, guns, gangsters, hookers, and cussing so this may not be one for the kid’s. It’s refreshing and different having a Superhero themed show like this; there’s nothing like it out there and it accurately portrays Matt Murdock’s story. 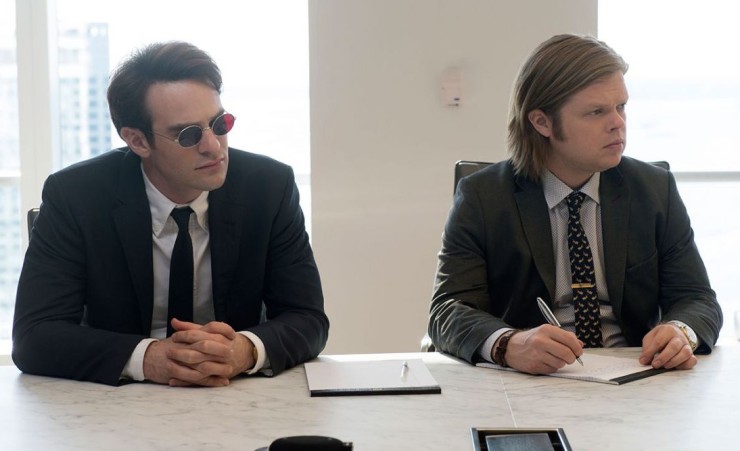 Because Marvel and Netflix are both involved, the production value is through the roof much like Netflix original “House of Cards.” Everything that has gone into the show has been so incredibly well thought out; the stunt work in every episode is mind blowing (particularly one long sequence in a hallway, just wait), the grittiness of Hell’s Kitchen feels real, the intro is beautifully designed, and everything down to the bad overhead lighting of the courtroom scenes (anyone who’s done jury duty knows it’s bad) is on point.

You forget you’re watching a television series as it feels more like a 13 hour movie. It’s that well done.

This is Marvel’s second attempt to tell the man without fear’s story, the first being a 2003 film by the same name. Out of the custody of Marvel Studio’s (who again own the character; series is in same world as all current Marvel films), 20th Century Fox rolled out a far too packed and convoluted Daredevil with an “eh” Ben Affleck as the main character.  It had an origin story, introduced long time love Elektra (Jennifer Garner, good casting but nothing to work with), and iconic villains Bullseye (a campy Colin Farrell) and Kingpin himself Wilson Fisk (Michael Clarke Duncan). 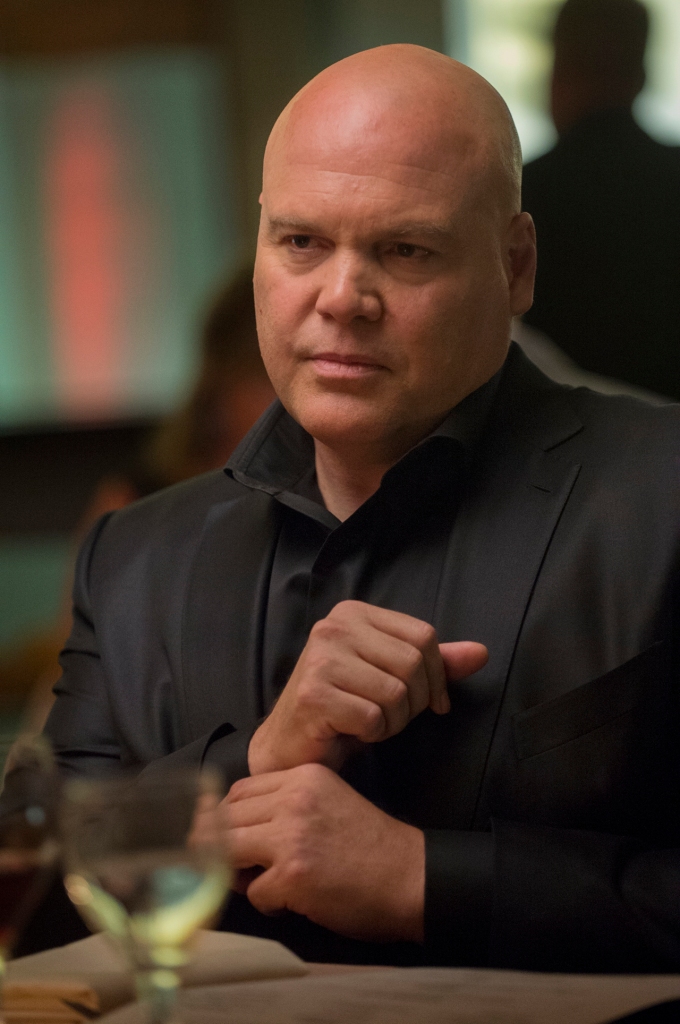 Daredevil is the kind of character who’s story should be told over time, so the format of a television series works far better than the film could. Leaving out Elektra and Bullseye was a smart move on Mr. Goddard’s part. Having Kingpin as the main protagonist is so much better. There’s no doubt that these iconic characters may pop up at some point in the future as they are both essential to Matt Murdock’s world.

Charlie Cox couldn’t be more perfect. The role of Matt Murdock requires someone who has a quiet vulnerability about them who in turn can kick a ton of ass and look convincing doing it, enter Mr.Cox. There’s a great deal of depth and thought that goes into his portrayal of the titular hero and as Daredevil is an incredibly complex character, trying to decide what truly is right and what is wrong, Mr.Cox’s portrayal is convincing and a must see. I haven’t enjoyed a performance like this in quite some time.

Flashback scenes with Matt’s boxer father Jack (John Patrick Hayden) are played out much better in the series then movie; their relationship is complicated and flawed, but his love for his son shines through. The physicality of Mr.Cox is also something that stands out. While incredibly fit, he’s not insanely muscular a la Thor so it’s refreshing to see almost the every man as a hero. Embodying exactly who Matt Murdock is.

You cannot have a Matt Murdock without a Foggy Nelson, and Elden Henson casting couldn’t be more on point. Mr. Elden brings the right amount of comic relief to the character without becoming a caricature. His relationship with Matt has a lot of history to it, and the chemistry between the actors evokes just that. He also gets moments of vulnerability that show great range for the comedic actor.

Ms.Woll had success in “True Blood,” but it’s not till this series that she’s really been able to excel. Karen Page’s story is an interesting one and vital to the story, so we won’t reveal too much about her. What’s great about Karen is she’s a strong female presence in a particularly male dominated show; flawed and much like Matt, Karen finds the lines of right and wrong slightly blurred. Some of the strongest chemistry in the show is between Karen and reporter at large Ben Urich (Vondie Curtis-Hall), who is not only excellent but brings heart to his role and is easily one of the best performances of the show. 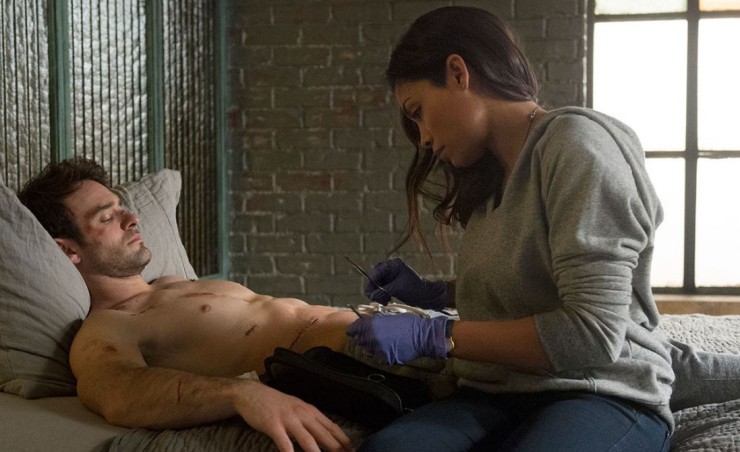 Hunky Matt and gorgeous Claire, not a bad pairing

Arguably the most complex performance in the show comes from Mr. D’Onofrio as the intimidating Wilson Fisk, AKA The Kingpin. In the comics, his characters comes off larger than life (not just because of his size) but here Mr. D’Onofrio dives into Fisk’s psyche unfolding just why he’s become the violent crime lord he is today. Again, not so spoil anything, Fisk is a very complicated character and the beyond talented Mr. D’Onofrio delivers an exquisite performance that will give you shivers. One scene in particular involving a car door will stay with you…

Sultry Ayelet Zurer portrays Fisk’s love interest Vanessa, an Art Dealer who see’s the potential in Fisk and can get on board with his generally insane behavior. Very Lady Macbeth. Interesting enough he’s never referred to as The Kingpin like the comics, which works better here as sometimes having a Superhero code-name can be cheesy and silly— which the show is far from. 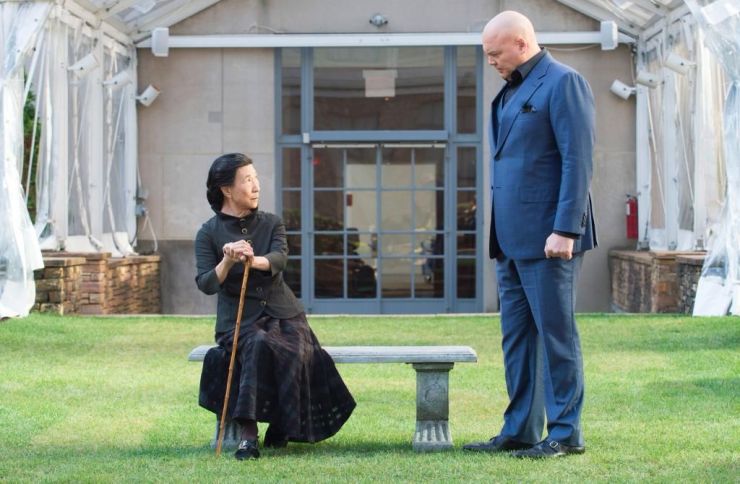 A character I wish were featured more is “Night Nurse” Claire, excellently portrayed by Ms. Dawson. Finding Matt beaten and bruised one night, nurse Claire trusts her gut after hearing a “masked man in Black” has been saving people left and right in Hell’s Kitchen and bandages him up. In the process Claire finds out Matt’s real identity and the two become sort of friends with Claire helping guide Matt’s moral compass. The chemistry between Mr. Cox and Ms.Dawson is one of the highlights or the series so let’s hope if we get more “Daredevil,” we’ll get more Rosario Dawson. 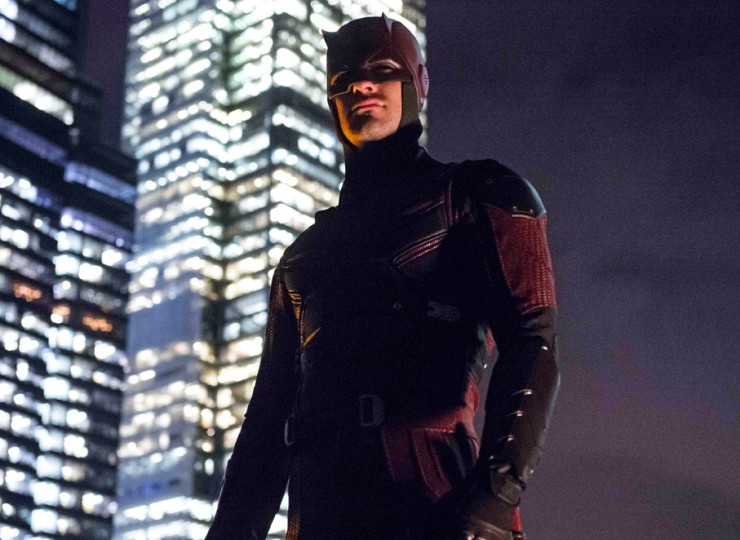 Iconic Red is the way to go

Something most fans noticed right away was that Daredevil was not wearing his iconic Red suit. Don’t worry: he eventually get’s it and it’s super badass. This was a smart move because we understand how he becomes Daredevil and the running joke of how bad his Black suit “sucks” and doesn’t protective is great. Getting a really good look at it, the creatives on the show really understood and adapted the suit in a modern and interesting way keeping the heritage of the character. I’d generally consider this a spoiler but the day the show premiered Netflix changed all the artwork on it’s site to the Red suit. So it’s out there.

Along with being visually stunning, the dialogue is witty and interesting as is the use of different cultures representing the diversity of New York City. There are a ring of gangsters involved with Fisk— Japanese, Russian, Spanish— showing the melting pot NYC really is and  having dialogue spoken with subtitles. It’s realistic and gritty, just like our beloved city.

The show is not without flaw. If I had to nitpick— and this is only because I’m a New Yorker— while set in Hell’s Kitchen, the bulk of the show was filmed in Brooklyn and looks that way a lot in the episodes. It’s not so distracting that it’s a problem, but it’s evident in the skyline and in some street scenes. The only other problem is pacing and timing as a few episodes have scenes that run a tad long, but it’s not in many so let’s look the other way.

If you’re looking for an original show that blends Superheroes, crime, a little bit of courtroom drama, and the heart of New York City beating throughout, “Daredevil” is for you. Season One of “Daredevil” is now available in it’s entirety to stream on Netflix.

All images courtesy of Netflix  and Marvel