The not so dead Danny Rand, AKA, The Iron Fist (Finn Jones)

The final Defender has arrived: The Iron Fist, AKA Danny Rand (“Game of Thrones” Finn Jones), the last member of the street level Superhero gang from Marvel and Netflix.

We’ve gotten two doses of Daredevil, one fantastic installment of  Jessica Jones, and an alright outing from Luke Cage. Unfortunately the martial artist of the group doesn’t fare nearly as well as his predecessors.

Like most Marvel series, “Iron Fist” is an origin story with (too) many a flashback that introduces Danny Rand. Travelling with his wealthy corporation owning family over the Himalaya’s their planes goes down with 10 year old Danny the only surviving member to the Rand fortune. Fifteen years Danny returns to New York City disheveled and dirty carrying a very old iPod and quickly shows the guards at the office he’s had plenty of training via martial artist Monks from the fictional land he landed in once thrown from the plan. Even for a Superhero story Danny’s is a little bit wonky.

“Great, now we have to share our fortune…” Ward and Joy Meachum (Tom Pelphrey and Jessica Stroup, L to R) with Danny (Jones)

His namesake company has since been run by his Fathers partner Harold Meachum (a terrifying David Wenham) who’s since “passed away” and left the responsibility of a multibillion dollar company in the hands of his 20-something kids Joy and Ward (Jessica Stroup and Tom Pelphrey). These people were like family to Danny and instead of embracing him they quickly realize his return will result in their bank accounts to dwindle. Sharing doesn’t seem to be a Meachum strong suit.

This is the very shorthand version of Danny’s muddied up story.

It’s pretty evident why Marvel put Iron Fist on the back-burner introducing the Billionaire turned Hero last of The Defenders members. Watching Season 1 there seems to be some truth to all the hubbub the book was proving too hard to adapt and the series was almost completely scrapped. While I always want more when it comes to Marvel, introducing Danny with less episodes (13 episodes was about 11 too many) or even just in “The Defenders” would have been a much better decision.

When not stuck in a flashback, Danny (Jones) likes to kick things

While not nearly as tragic as early reviews were making it out to be, compared to what we know a Marvel Netflix team up is capable of it’s not nearly as strong. A constant critique from almost every review was pacing, blaming Netflix’s pitfall of letting scenes go on too long, but I felt the opposite. There was just way too munch happening in just the first episode alone leaving us with a choppy and uneven debut.

Each of The Defenders has had a unique spin revealing their individual season to be more than just a Superhero series. Daredevil was an action packed courtroom drama, Jessica Jones a noir psychological feminist thriller, and Luke Cage an urban crime story with political and social undertones. 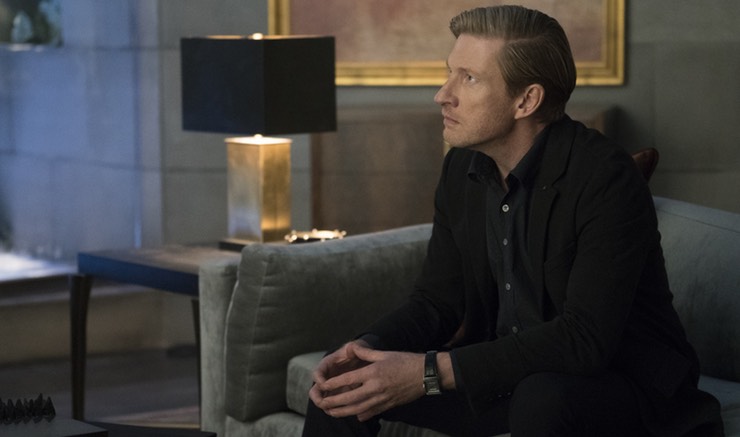 Harold (David Wenham) no doubt about to do something psychotic

“Iron Fist” should have been the kick ass Martial Arts entry we deserved and instead you’re watching a convoluted story of an emerging Superhero that’s also an office drama mixed with a Family high-jinx hybrid. The many plot points are unbalanced and to say it’s distracting is an understatement. Additional character introductions— that should be revealed as you watch remaining a surprise— muddy the show even further and complicate the story to no end.

If you’re familiar with “The Defenders” universe you’ll find while The Hand actually makes sense the most in this series it feels stale as we’ve seen it featured so heavily in Daredevil. Instead of feeling original, “Iron Fist” almost feels like a very watered down extension of the second season of”Daredevil” and not nearly as fun. Hopefully this will have wrapped up their storyline and it’ll only be referenced here on out.

A (strong) argument has been made, with no help by Iron Fist’s creator, that Marvel’s choice in not restructuring Danny’s origin story was a miss. Many felt that rather than following the Comic roots of having a Billionaire White Boy learn the ways of Kung fu it should have been a Billionaire of Asian-American descent. This way the character would have a deeper understanding of his roots to better represent the Asian-American community; bringing that much more diversity to “The Defenders.” Would the series have been more compelling? Was Finn Choice actually a good choice? I still don’t know where I land on this but I do know “Iron Fist” could have been light-years more entertaining than what we got. 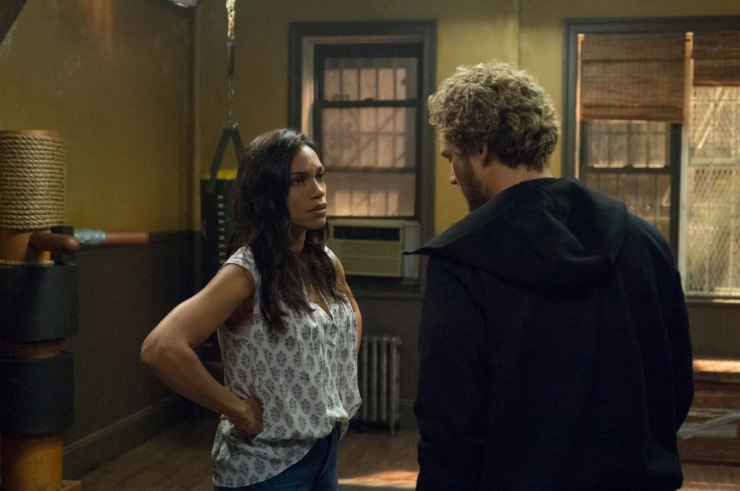 The flashbacks were also not handled with care. With so many of them it would have been more interesting to see Danny training instead of his parents ripped out of a crashing plane every other episode. One particular scene of Danny overcoming his anxiety/fear of flying borders on cliche and is one of the most cringe-worthy scenes. Maybe one of the biggest surprises was how low the production value was compared to other Marvel/Netflix series. Everything from sets to cinematography feels as if it’s from a totally different world and not nearly as cohesive as what we have seen before.

Subtle references to Luke Cage (“Sweet Christmas” is uttered by Claire), Jessica Jones (who apparently really is always drunk), and Daredevil (Karen Page gets a byline) are all there keeping continuity but “Iron Fist” still doesn’t fit into the world we’ve been introduced to.

Content aside, the action sequences are pretty fantastic— really, who doesn’t love Martial Arts? There’s a nod to “Daredevil” with a hallway fight chock full of hatchets that even though borders on leaning on the fan favorite crutch over originality is still quite good. There’s also a total cool geek factor when Danny’s hands light up becoming the Iron Fist. Something that is totally missing is Danny’s classic Iron Fist costume from the Comics. No doubt it would make him stick out like a sore thumb, and there are veiled references to it in his garb when training, but it’s a bummer we don’t get to see him be a little bit of a Superhero.

Mr. Jones, with material given, is likable enough as the wildly zen Danny Rand. You can’t help but wonder how he’ll vibe with moody Daredevil and Jessica Jones, but it will be exciting to see how his friendship develops with Luke. Sometimes he’s the comic relief, sometimes not, and his inconsistency makes him what will no doubt be the weakest link in “The Defenders.” With it’s track record you’d think Marvel would have cast someone with more charisma. Let’s hope we just haven’t seen the best side of Mr.Jones. 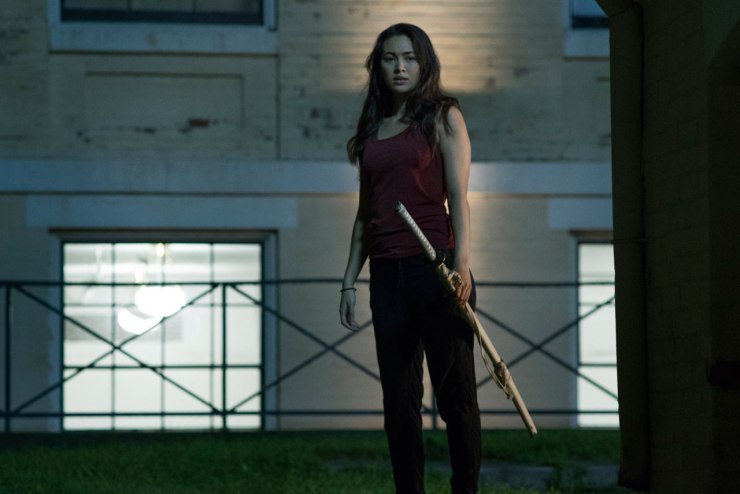 “I really deserve my own show…” Colleen Wing (Jessica Henwick)

Unfortunately, Danny is the furthest thing from a standout. When he meets Dojo owning Colleen Wing (Jessica Henwick) Danny ends up looking like guest star in his own series. Colleen is cool, tough, and way more a badass than anyone else on screen. Colleen and Danny predictably end up in bed together and it’s pretty lackluster. Why not make Danny Gay? Would have added some actual interest to the character, plus, I don’t think Colleen really would have gone for him. He’s kind of bland and the notion he loses his V-Card to her makes you shutter.

Thankfully the Girl Power makes up for how “eh” everyone else is as Rosario Dawson’s Night Nurse Claire is back. No doubt to be the thread brining all The Defenders together it’s another great outing by the talented Dawson. Having Claire featured so heavily in the show though feels a bit forced like Netflix and Marvel knew she needed to be there to feign interest. A shame because Claire is such a great character and has excellent chemistry with Colleen, but fails to make a connection with Danny. 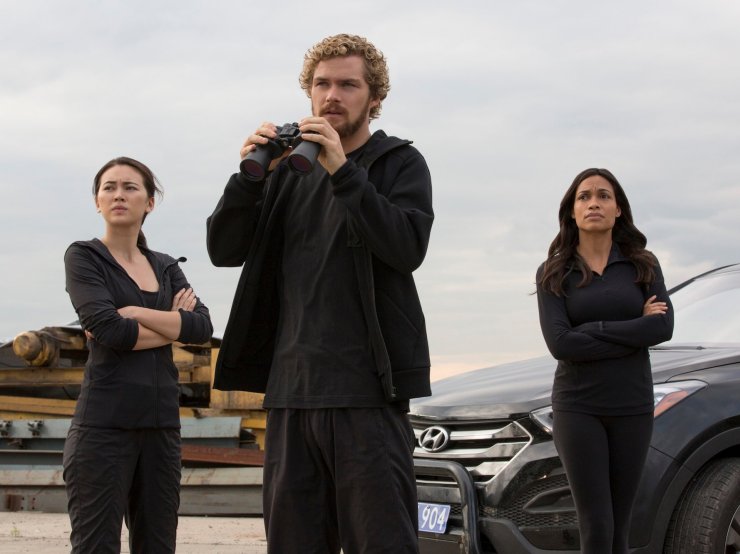 Colleen (Henwick) and Claire (Dawson) are no doubt both thinking, “Shit, we are carrying this show…you’re welcome, Danny…”

The only head scratcher by the end of episode 13 is why Claire doesn’t call any other Superhero buddies. Like, “Hey, it’s Claire, I’m the nurse that saved your ass about ten time. Soooooo, The Hand is back and we could really use some help so we don’t all die.” No doubt the goal is to have them all meet in the titular series but it just seems completely unbelievable she wouldn’t even send out a smoke signal.

More interesting than Danny’s story is the distracting family dynamic of the wildly dysfunctional Meachum’s. Ms.Stroup’s Joy gets a killer wardrobe, think sexy heels and structured shifts, and her odd balance of integrity and confusion when it comes to putting her family first is actually one of the stronger parts of the show. Her Brother Ward couldn’t be less stable and by seasons end Mr.Pelphrey proves unhinged may be his specialty. These two could get a spinoff and it would most likely be more interesting than all of “Iron Fist.”

The Meachum’s feel like they are in a totally different show especially when their Father returns from the dead. A slight spoiler alert, but when any of the characters find out he isn’t actually dead they are totally unfazed and it’s totally unbelievable. Mr.Wenham’s Harold is tons of fun to watch because he makes a terrific, if not over the top, villain. It also should be noted that he’s got a great haircut. Things like that should be applauded. 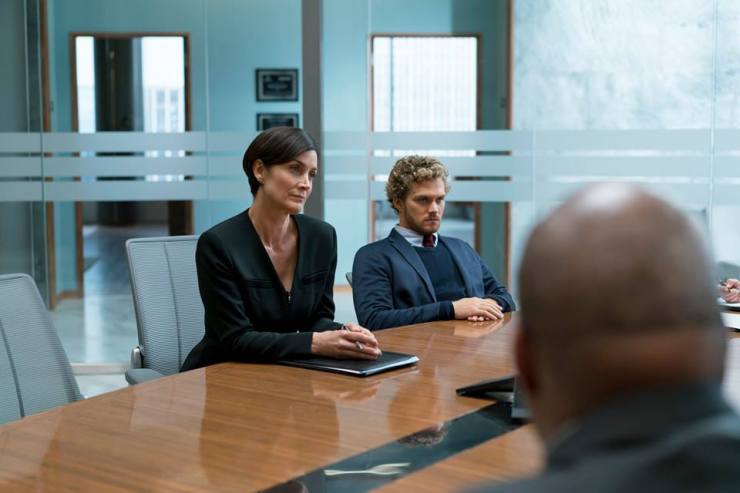 “Is it time for Season 2 of Jessica Jones yet, or what? This place sucks…” Jeri Hogarth (Carrie-Anne Moss)

Madame Gao (Wai Ching Ho), who’s been a central figure in Daredevil’s story, is a large part of “Iron Fist” and gets more screen time than ever. While it’s always nice to see her, her air of mystery is more interesting than what ends up happening to her by seasons end. Also popping up is Carrie-Anne Moss’ lawyer shark Jeri Hogarth who proves that no matter what Marvel show she’s on she’s biting and excellent. Again, one of the few highlights from the show.

While each hero has been granted a second season pre or post Defenders team up, it doesn’t look likely  the Iron Fist will get another solo outing. Danny would fare best hanging with future BFF Luke Uptown in his next installment. Fingers crossed that the next time we see him in “The Defenders” he gets some justice and become a fan-favorite. For someone who loves Marvel as much as I do, I was left gobsmacked at how disappointed I was in Danny Rand first outing. I do believe there is more to the Iron Fist and I am excited to see what’s next. 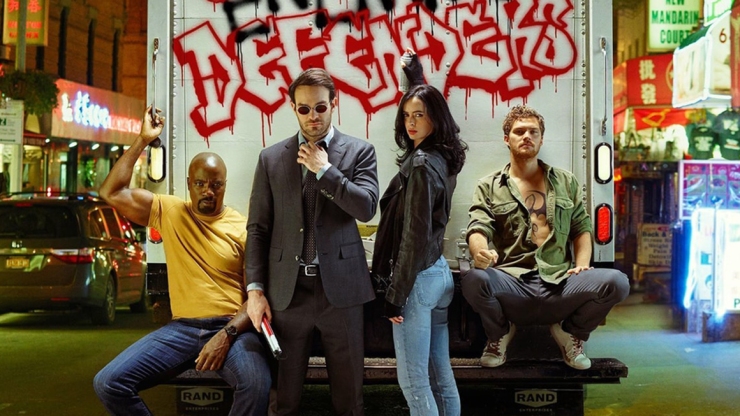 Season One of “Iron Fist” is now available in it’s entirety to stream on Netflix.

All images courtesy of Netflix , Entertainment Weekly, and Marvel