We’ve seen a blind vigilante, twice, a foul mouthed whiskey swiggin’ badass, and soon we’ll get a mystical martial arts expert. They make up the Defenders, Marvel’s street level Superhero team not dissimilar to the Avengers— if the Avengers had potty mouths and a lot, a lot, of rough sex.

The fourth and final Defenders comes by way of a bulletproof hunk of a man: Luke Cage.

If you’re following Marvel and Netflix’s journey to The Defenders you’ve met Luke (Mike Colter) in the spectacular “Jessica Jones” (starring Krysten Ritter). Even though he’s been popping up on the page since 1972, unless you’ve followed this, you may not that familiar with the hero for hire, aka Power Man, as he’s yet to be featured in a mainstream project. So why not give him his own Netflix series?

Thanks to an experiment gone awry, like most Superhero origins, Luke was left with superhuman strength and impregnable skin making him bullet and bomb proof—dude can withstand anything, it’s pretty impressive. After the events in Hells Kitchen with Jessica, Luke finds himself back in Harlem trying to keep a low profile sweeping hair at Pop’s (Frankie Faison AKA the cutest little man in the world) Barbershop and slinging drinks at the Harlem Paradise club run by Cottonmouth (Mahershala Ali), the worlds most stylish and charismatic thug.

While Luke’s conscious prevents him from turning a blind eye to the blatant crime in Harlem, the low key thing goes right out the window catching the eye of Cottonmouth’s diabolical Politician cousin Mariah Dillard (the compelling Alfre Woodard) and the very sexy, and sassy, Detective Misty Knight (the stunning Simone Missick). After that, Luke’s past catches up with as his future unwillingly turns into a beacon of hope in Harlem.

Continuing the high quality streak Netflix and Marvel are on, “Luke Cage” is stunning. Fantastic cinematography with an authentic steadicam and appealing palette make it visually engaging. From the hues of Yellow in the opening credits to the end of every episode. Unfortunately the same cannot be said for the pacing which at times lags as the next scene is a welcome change. If anything, this is the series biggest pitfall.

Aint takin’ none of that crap: Misty Knight (Simone Missick).

Refreshingly music is very important in the series with a different live act each episode at the Paradise Club paired with a very 70’s score emulating classic Black culture cinema like “Shaft” and “Super Fly.” Stylized without being too much of a reference. It still feels unique and original and one of the better aspects of the show.

“Jessica Jones” was the definition of a binge: you wanted, needed, to know what happened next. You’d willingly keep yourself up till 4 AM to “just watch one more” as Jessica was essentially a psychological thriller embedded into a Superhero series. “Daredevil” also had the same binge-effect, more so in season one than two, but sadly “Luke Cage” doesn’t have the same quality to it.

Luke’s world feels authentic and a great deal of that is due to the language, realistic sex scenes, and setting. Unlike it’s fellow Netflix shows, where the worst curse hardly causes one to blush, “Luke Cage” doesn’t shy away from dropping the N-word many a time. Of all the Netflix/Marvel collaborations, this is most definitely the adult, which is a welcome change but it should be advised: not for the Kids.

Mr.Colter has been very vocal in that Luke’s signature hoodie is not only a nod to his appearance in the Comics, but to Trayvon Martin. Throughout thirteen episodes the constant Political theme of “Black lives matter” can feel a bit in your face whilst remaining important and a pivotal part of the shows DNA. There is no denying there’s a problem with racial issues in this country, and Luke Cage’s Harlem is no exception. 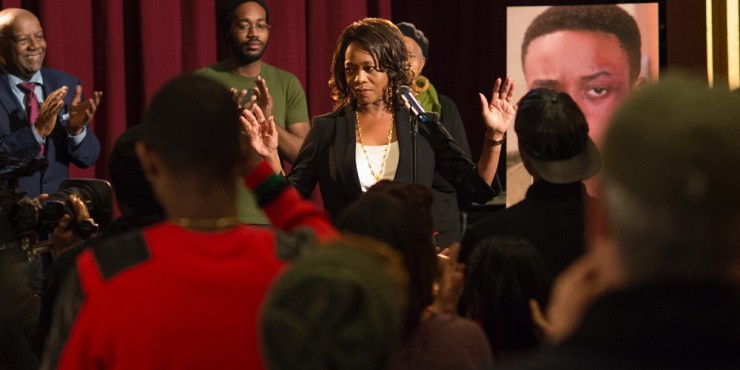 “Please, please. I know! I am fabulous. Now let me speak!”

Incorporating the, unfortunate, rise in Police brutality we are currently experiencing throughout the nation also brings a level of realness that is so authentic and alarming you almost applaud Marvel for making such a statement. While overall a strong, original series, moments of cliche can be eye-rolling to say the least, i.e. a crooked cops storyline that is so dragged out you lose interest by the end of it. What is wildly impressive are the amazing combat sequences we get from Luke. Mr.Colter’s physicality is so intense you’ll do a double take.

While most elements really worked, like hilarious well-paced flashbacks giving an on the nose nod to Luke’s comic outfit, some did not like the obvious lack of LGBTQ characters. This felt especially strange after being so heavily featured in Jessica Jones (Carrie Ann-Moss as Jeri) and a strong theme of acceptance and diversity that the series stands for. Hopefully this will be an element of “Iron Fist.”

Why screw with Luke? It will end like this.

What is stronger than the series overall are the performances by every talented actor gracing the small screen or streaming device, whatever you watch on these days.

The casting of Mike Colter as Luke Cage, like all Marvel casting, if perfect and intoxicating. Besides being a quite visual stunner, Mr.Colter is an exceptional actor from the way he delivers Luke’s signature catchphrase “Sweet Christmas!” to this denouncing the N-word whenever called it, righting a wrong that is far overdue. He’s thoughtful, masculine but not overbearing, and simply a pleasure to watch. It only makes us all that more excited to see what he’s cooked up for us in “The Defenders.”

If you are having deja vu with Ms.Woodard’s in the MCU that’s because she appeared in a very tiny, but important, role in “Captain America: Civil War” as a much kinder character. Obviously seeing wild potential for “Luke Cage,” Marvel quickly cast her as who Comic Book fans affectionately know her as Black Mariah.

Whatever you do do not trust that smile.

Everything from “True Blood” to “Desperate Housewives” Ms.Woodard shines and “Luke Cage” can be added to the list; she is bad to the bone and the best kind of villain. The only problem is she’s wasted for more than half the season. Ms.Woodard finally get’s a showcase around episode 6, but until then, it’s a total waste of talent. Ms.Woodard’s chemistry is off the charts with every interaction she has from her right hand Alex (John Clarence Stewart) who’ll do whatever she says to Luke himself who may overpower her in stature but she could take him on at the snap of a finger.

Story wise it makes sense why she does not get her dues at first, but the 360 she makes mid way through seems a little out of character even if it’s an absolute treat in the end.

Cottonmouth and Shades (Theo Rossi) waiting for a fresh cut.

Characters like Cottonmouth get quite a bit of screen time and if you aren’t familiar with Mr.Ali’s wonderful work on fellow Netflix show “House of Cards,” then you’ll have the pleasure of witnessing it for the first time now. He’s so completely unlikable you cannot keep your eyes off him. Same could be said for his crew member Shades (Theo Rossi) who also gets ample screen time but where Mr.Ali knows how to control a room, Mr.Rossi’s crazy eyes once those shades come off seem more all over the place than intimidating. His facial expressions are distracting and the moment is lost.

Marvel has, unfairly, been under fire for not putting enough focus on strong female characters— have you not noticed Black Widow (Scarlett Johansson), Scarlet Witch (Elizabeth Olsen), Gamora (Zoe Saldana), Jessica Jones (Ritter)? The list goes on including the standalone future film of Captain Marvel (Brie Larson). The caliber of these women on and off screen is outstanding and “Luke Cage” adds some fantastic badass ladies to the club.

A Netflix Marvel installment wouldn’t be complete without the return of our faithful Night Nurse Claire (Rosario Dawson) in her best outing to date. While “Daredevil” also showcased her talents and “Jessica Jones” gave her a wonderful part in the later part of the season, we dive more into Claire from her departure of the medical system to standing up for herself so not to get mugged. Ms.Dawson’s chemistry with Mr.Colter is electric and a showdown she has with Misty was one of the best moments all season.

There are also fantastic moments between Claire and her Mom (Sonia Braga, those of you who are Gay know her as Samantha Jones one and only Girlfriend in “Sex and The City”) that give that give even that much more insight to her character. Again, cannot wait for more Claire in the future. 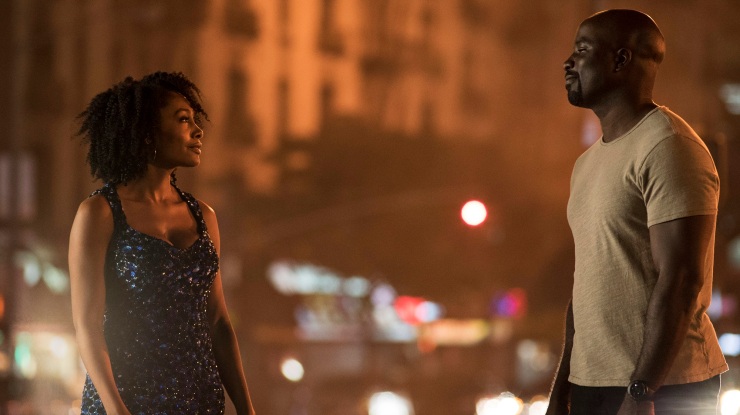 Misty and Luke’s first interaction. It ends with coffee, I swear.

It should be said that Misty Knight stole almost every scene that she was in. Ms.Missick brings a force with every line she delivery and with her unmistakable beauty, like Mr.Colter, it’s going to be fun to see what she brings to us in the future as this character. An interesting dynamic with her former mentor Inspector Ridley (Karen Pittman) without getting into spoiler-y territory definitely should be noted. Rounding out the female population, Luke’s former Wife Reva (Pariza Fitz-Henley) who we met in “Jessica Jones” via flashbacks also gets decent screen time.

Possibly a spoiler— turn back now— Jessica does not make a single appearance on the show. The only glimmer of Jones we get is a brief mentioned in a Political discussion and that it. While the events of her season validate the distance between her and Luke, it seems a bit strange when there’s a witch hunt out for Luke that the sleuth is nowhere in sight; feels out of character even for Jessica. Best friend Trish (Rachael Taylor), aka Hellcat, makes a very brief appearance in a voice over via her radio show. Other than that and our faithful Night Nurse, don’t expect to spot a fellow Netflix friend.

Season One of “Luke Cage” is now available in it’s entirety to stream on Netflix.

All images courtesy of Netflix  and Marvel