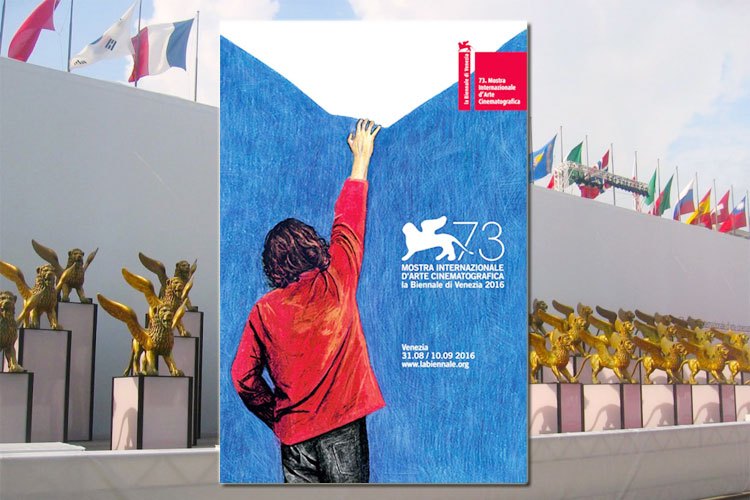 And we’re back! After a Summer sponsored sun, speedo’s, and Suaza Tequila, The New York Narrative is begrudgingly plugging back in and getting back to reality. The unofficial Summer hiatus is over! Know you’ve all been waiting with bated breath…

With Fall comes plenty of new Runway and Red Carpet looks courtesy of New York City Fashion week along with plenty of Film Festivals. The 73rd Venice Film Festival kicks off the season and while one of the more glamorous events, I’m firmly on the fence if this year delivered or was completely lack-luster. Scroll down and you be the judge.

So enjoy, thanks for sticking with us, and look for plenty of fun coming your way this Fall!

Giving us just the right amount of Brady Bunch wallpaper, Emma Stone’s custom Giambattista Valli belle sleeved flirty number is a fantastic choice for a Photocall; memorable but not overwhelming. The color scheme works with her crimson locks, which she’s thankfully back to, and as always Ms.Stone is being playful with Fashion.

That Jimmy Choo color is to die for; unexpected and the perfect transition into Fall without pushing it. I mean, is anyone really ready for Summer to end?

Here we are folks, the moment we have all been waiting for: Emma Stone’s slaying the Red Carpet.

In what is no doubt one of her best Red Carpet walks to date, Ms.Stone strutted her stuff in the most stunning icey-Blue sparkling Versace, a modern take on Flapper, that was too chic for words. Everything is working here; the high neck, the dramatic strips of fringe (instantly making me think of this classic Cher/Bob Mackie collab), complimentary hair and make-up— all of it, perfection.

All that beading and perfectly placed stripping makes this a work of art and honestly one of the finest creations Versace has ever made. For this look alone I smell Oscar…apparently “La La Land” is outstanding.

Assuming she’d had just about enough of all that jazz (not to mention it probably weighed her down) Ms.Stone chose a lavender nighty with gorgeous cascading ruffles, also Versace, for the afterparty of her praised film.

Of all three looks, this is my least fave as it’s terribly 90’s and my least favorite fabric choice the Oscar nominee could have chosen.

In what has become a signature style of lace and crepe from Stella McCartney, former Bond Babe Gemma Arterton knocked it out of the park in her classic gown. I’ve nothing else to say because she’s so pretty it hurts.

Apparently this very pretty girl is in the upcoming Tim Burton production “Miss Peregrine’s Home for Peculiar Children,” but I have no idea who she is. What I do know is that if she had laid flat in the limo she’d have avoided those crotch creases and gotten a 10 from me.

Between the embellished jumpsuit, metallic T-Straps, and that vampy make-up this is a stand out outing.

It’s always a delight to see Amy Adams on the Red Carpet. She brings a touch of Old Hollywood glam and class topped off with those signature flaming locks that always makes me smile. The 42 year old also hasn’t touched her face with a needle which is wildly refreshing.

While I absolutely love this color combo on the Oscar Nominee, I’am overly thrilled with that ridiculous double ended plastic zipper that is ruining her Fendi frock. Was the concept to make a fancy scuba suit? Is destroys the look, a shame, because otherwise it’s very flattering.

Kudo’s on the black Louboutin’s matching the trim and that perfect hair.

Ms.Adams “Arrival” costar chose classic separates in Black, White, and Grey. While I am digging his buzz cut and overall appearance, what’s up with the crest on the pocket? Was Polo circa 2001 having a sale? Feels dated. 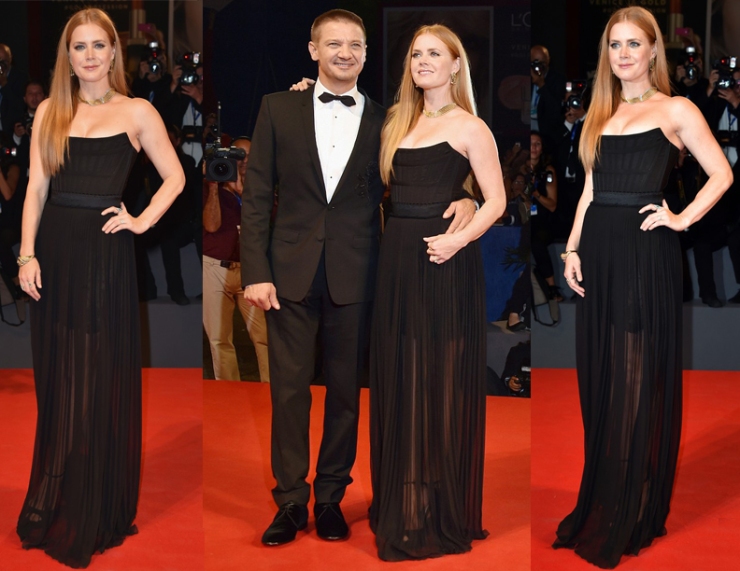 I’ve forgotten all about the Fendi, Amy. No hard feelings.

Ms.Adams, yet again, proves to us she’s perfection personified in her strapless Stella McCartney gown with a beautifully constructed boned bodice, sheer skirt, and nipped in satin waist. This stunning piece perfectly showcased her enviable hair and just the right amount of jewels. The stick straight do is refreshing in a sea of “Real Housewives of something or other” waves.

Anything but basic Black. Thank you, Amy.

Mr.Renner complimented his lovely costar in perfectly fit Dolce& Gabbana that showed all the right sings of classic Menswear without being boring. A satirically small bowtie and slight adornment under his lapel keep it interesting and the buzz cut keeps it cool.

Anyone else dying to see “Arrival?” Clearly the Venice Film Festival is all about Ms.Adams, who is having a hell of  week, which leads us to… 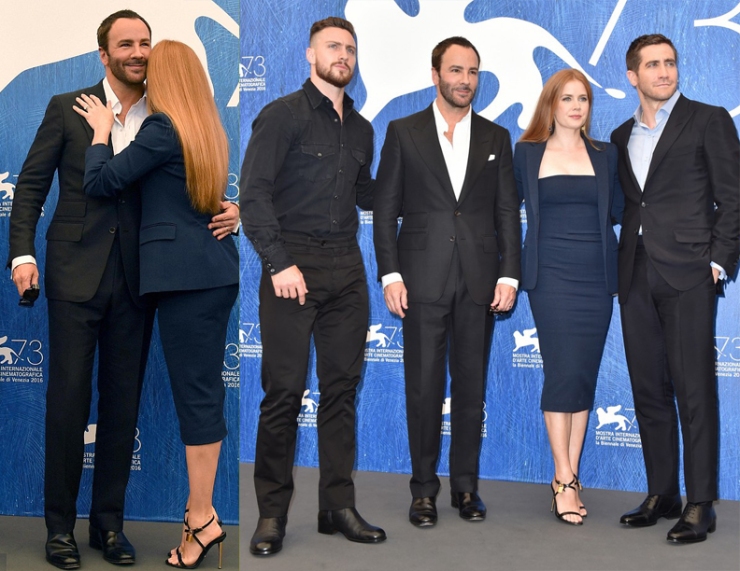 To no one’s surprise, Mr.Ford’s sophomore film, “Nocturnal Animals,” is getting rave reviews. It’s a sure bet for every, and all, Awards this coming season. Bravo, handsome. Also handsome? Mr.Ford’s impeccable and signature offering of the most incredibly cut suit, crisp white shirt, and close cropped hair.

Aaaron Taylor-Johnson looks like a cleaned up version of Tom of Finland and I’m not mad at it.

I prefer a more severe look like this on Ms.Adams over the whimsical Fendi, mostly for the sophistication aspect.

I’ve nothing to say about Jake Gyllenhaal’s perfect Tom Ford ensemble because there are no words. He’s so  handsome it hurts. Le sigh, le sigh…

This is apparently Amy’s movie, and clearly Mr.Ford wanted his leading lady to make a splash on the Red Carpet. This is one of the most stunning pieces he’s created in recent years.

The construction is exquisite, the Gold hue matched perfectly with Ms.Adams hair, and that Bvlgari serpent wrap bracelet is outstanding.Cannot wait for her promo tour for the film stateside.

While I love the look, it doesn’t seem so age appropriate for the 19 year old starlet. Something a bit more playful could have worked better. Though it’s so sophisticated and chic maybe this was the best ever Red Carpet debut?

Naomi Watts is always one of my faves on the Red Carpet because she loves to dress up and she loves glamour. This particular film festival I’m wildly let down, with the exception of this Cavalli number.

The laid back style, the flecks of gold throughout, those two-toned crushed velvet Prada heels…it’s such a signature Watts look in the best possible way. Total win for me.

From winning to…whatever this is…

Stepping out in an embellished nude gauzy gown from the gorgeous Runway of Elie Saab should have been fantastic, yet, nothing about this is magical for me. The strap, belt, and heels all feel heavy and the earth tones are just…no.

Naomi went from lackluster Princess to Chiquita the Banana lady.

Remember when Jude Law was extremely handsome? Really though, like, super-duper Mr.Napkin Head handsome? When did this happen!?! Jude, baby, why?

All I can say is I hope Girlfriend actually is pregnant and not wanting to share the news yet. Only excuse for this shapeless, dumpster diving, look…

…yeah, I’m going to go with pregnant…improvement or matronly?

PS: How did she get out of wearing any Dior for these appearances? 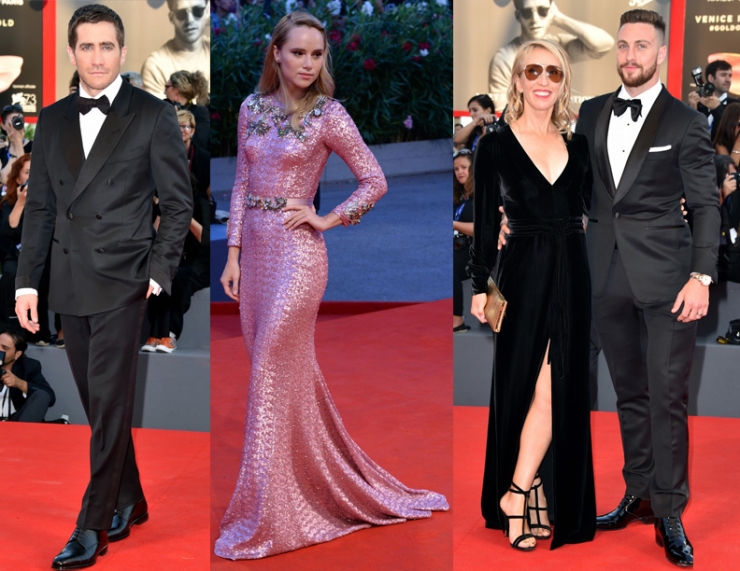 Fella’s this is how you do a classic double breasted evening look, FYI. Perfection from head to toe. Can’t Jake be on every Red Carpet?

A refreshing waft of sequin Pink, Suki Waterhouse (I still don’t know who she is) was statuesque and lovely in her embellished Dolce & Gabbana gown. Had she a dark manicure this could have been a 10.

Mr.Taylor-Johnson’s Tom Ford suit, while gorgeous, was a tad snug for the incredibly muscular actor. Must say I’m a little surprised the tailoring wasn’t better executed, it being from Mr.Ford and all…

Aaron’s director wife donned a long sleeved crushed velvet gown, also Mr.Ford, with a high slit and incredible accessories. Loving the sunnies with such a high-end gown, but wishing they weren’t aviators. While my shape of choice, they don’t fit her face very well at all.

Alicia Vikander, Prabal Gurung- Photocall and Press for “The Light Between Oceans”

Oscar winner Alicia Vikander made her way to Venice sporting a Boho-esque tie-dye number from Prabel Gurung paired with new bangs and a ponytail. Does the dress seem a bit on casual side for such a prestigious event? Arguably appropriate since it’s just a photocall but those shoes…are those Clarks? Does she have an ankle injury? They ruin the youthfulness of the look and take it into J.Jill territory. Shivers…

Michael Fassbender-Photocall and Press for “The Light Between Oceans” 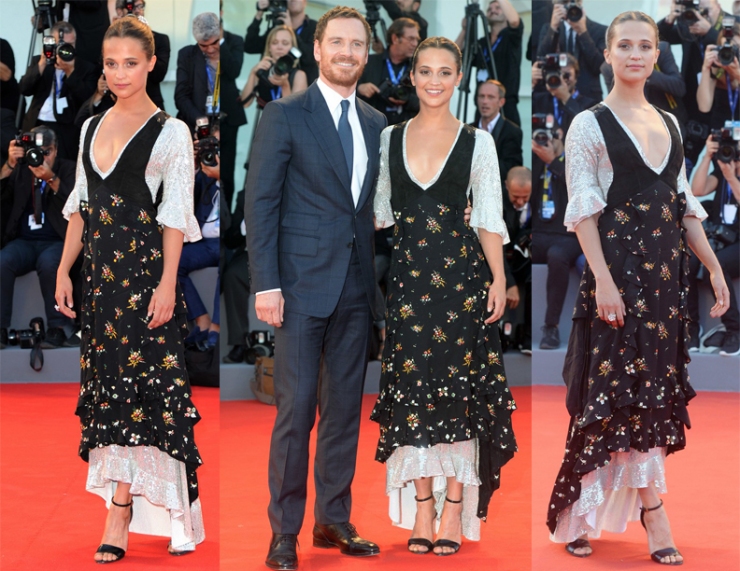 Alicia Vikander, Louis Vuitton and Michael Fassbender- Premiere of “The Light Between Oceans”

As the face of Louis Vuitton, and per her hefty contract, it was no surprise to see Ms.Vikander sporting an LV look for the premiere. While I don’t exactly hate her “Little Home on the Prairie” dress, it’s not exactly the glamorous showstopper I was hoping for. As the face of a brand like Vuitton you’d think they’d make her something custom to fit the event; this is for the TriBeca Film Festival.

Mr.Fassbender’s suit is nice enough, but nothing to write home about. He usually steps it up a bit in the Menswear department so this a bit of a yawn for me.

I didn’t realize A.How much I prefer Sophie Turner as a Blonde, and B. How hot she is!

The “Game of Thrones” beauty looked sensational in a low cut Black and White embellished dress from Yanina Couture with layered skirt that was a balance of sexy and modern without tipping the scales of aging the 20 year old.

Dakota Fanning shows us you can be youthful and sophisticated in her sparkly Miu Miu confectionary gown. Starlets tend to dress too old so it’s refreshing to see Ms.Fanning in something so fun.

Misty Day called and wants her dress back. That hair color…woof.

Zoey Deutch’s signature Miu Miu style mini is too prissy for the pretty star; her hair also ages her about 15 years.

Not much to write home on for this Dakota-Miu Miu collaboration other than her crushed velvet platforms are to die for. She should borrow Juno’s V05 though…

All images courtesy of Getty.